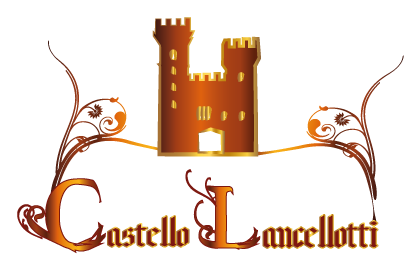 The library contains very old books, including some valuable fifteenth-century works by Latin authors, from Cicero to Seneca to Orazio, Livio and Tacito, as well as those of the classics of Italian literature, from Dante to Petrarca to Manzoni. A specific sector is dedicated to the history of the papacy and to the Roman question of 1870 when the capital was occupied by the Savoy troops. Worthy of note are the voluminous master books bound in leather that show the data of the income and expenditure of the family heritage.
On the entrance is the painting in memory of Camillo Massimo, father of Filippo.

The chapel is one of the most important architectural spaces of the castle. Filippo Massimo Lancellotti claimed to have built it for the sake of art and the salvation of his soul and dedicated it to the Blessed Virgin Mary and to Saint Philip Neri on August 27, 1882. However, the works continued well beyond that date and the bell tower was concluded only in 1909, as indicated by the date on the flag.

The chapel looks like a collection of styles: from the early Christian to the Byzantine, from the Romanesque to the Gothic. The façade is preceded by a marble protiro splayed with lions with stilofori, surmounted by a beautiful rose window. On the architrave, in a half-moon, is represented the city of Nola protected by Saints Felice and Paolino. On the walls of the chapel are depicted scenes of illustrated Franciscan miracles with captions also painted. On the opposite side, on the sides of the entrance door, two small marble stoups recomposed on lions.

On the wall are painted the construction and delivery to the Franciscan friars of the convent of S. Giovanni in Palco in 1396 by the count of Nola Nicolò Orsini and the subsequent re-consecration in 1747.

The vault of the apsidal basin houses a painting that imitates an ancient Byzantine style mosaic. At the center is the Christ Pantocrator flanked by Filippo Massimo Lancellotti, Elisabetta Aldobrandini and his sons.

Littel cloister
Set between the chapel and the library, the quadrangular cloister is marked by five small arches on each side, with an element of clear monastic inspiration. It appears to us as a perfect place for meditation: open upwards and closed to the clamor of the outside world.

This is the bedroom of Filippo Massimo Lancellotti’s parents. The furniture, consistent with the castle architecture, is inspired by eclecticism. In fact, we find a neoclassical four-postered bed, a Dantesque-Savonarola style chair, a late baroque cradle and, in the same style, a nice frame of mirror placed on a “fratino” style table; finally, there is a wardrobe opposite the bed and some small chairs in front of the window.
Originally, this room was larger; but then a corridor was made out of it at the back of the bed, in order to have an indipendent access to the bathroom and lavatory for each bedroom.

This room, with a dummy coffered unit and golden decorations, is characterized by its walls painted in vertical yellow and red strips, with arabesques and vegetable decorations, completing in a frieze with portrayals of animals having allegorical meanings. At the end of the room a fireplace stands out, above which Francesco Leonardi painted the allegorical figure of Rome, in 1873.
Some distinctive features of it clearly refer to the close relationship between the Lancellotti family and the papal environment, such as the tiara and St. Peter’s keys
which the matron holds in her left hand, as well as the inscription “Roma caput mundi” (Rome, the capital of the world), while the laurel branch she holds in her right hand stands for the Lancellottis’ gratitude towards their new feud Lauro

The Red Room or The Room of the English

It is called after the colour of its walls, on which two coats of arms are printed: the Family Lancelloti’s and Elizabeth Aldobrandini’s, who was Filippo Massimo Lancellotti’s wife.
In this room there is a wide fireplace, that clearly doesn’t match with the architecture of the place; in fact, it was built by the English soldiers during the second world war, when the castle became their military base, which gives the room its second name.
On the doors, you can see some refined typical ceramic works, called majolica jars, once used for keeping some spice and medical substance, but now used as candle-sticks. The room gives onto the wide southern terrace that overlooks the whole Valley.

This is a second bedroom, also called The Cardinal’s Room for the typical “red cardinal” colour it is painted. At the centre of the room, there is a four-poster bed, with some crests embellishing the top of it; besides, a glass cabinet style writing desk, with its legs reminding the roebuck’s feet and, finally, a chest of drawers opposite the bed.
At the back of the room, near the door, there is a screen with the Lancellotti’s coat of arms on it.

It’s a wide rectangular hall, lighted by six windows. It was the ancient Great Hall that was used for receiving the most important guests and was the place where both parties and solemn court ceremonies were held. It is named after the arms placed on its walls : helmets, lances, halberds, armour. From the center of the Hall ceiling, a big bronze chandelier hangs, that symbolizes the sun. Along the frieze, at the top of the walls, there are paintings representing the coats of arms of the families who ruled over Lauro, from the Sanseverinos to the Lancellottis , with views of palaces and villas belonged to the Lancellotti Family. On the southern wall, there is a large baroque fireplace, with above Tibullo’s verse “assiduo luceat igne” (let it shine with continuous fire).

On the northern wall, instead, there is a big picture showing the fire set to the castle by the French troops on 30th April 1799.

This is the room where the noblemen used to spend their time playing snooker.
The coffered ceiling is decorated with golden studs; the walls are green, just to match with the colour of the pool cloth, in the middle of the room. On the sides of the pool there are some wooden benches, with the Lancellottis’ coat of arms above them.

This room keeps the remains of a palanquin, that now is used as a set of shelves, and the plaster casts of Lauro’s Patron Saints Rocco and Sebastiano. In the middle of the room, you see the plastic of the castle as this was after the fire in 1799 and before the reconstruction started in 1870 by Filippo Massimo Lancellotti.

On the wall, in the middle of the stable, in front of the classic portal, emerges the coat of arms of the Lancellotti family recomposed with orthopedic horseshoes. Among the four ancient carriages, different for their characteristics and age, the wooden sculpture of a horse is imposed. The furnishing of the environment is completed by harnesses and harnesses of various kinds along with various types of saddles, among them, the “Amazon” reserved for women.
Along the walls there are stalls and mangers on whose bottom ceramic bowls are walled according to a fine and rare use. Outside, on the other hand, there is a large stone drinking trough and a balcony to encourage horseback riding.

Once upon a time in an enchanted castle …
Find out more

You can find out more about which cookies we are using or switch them off in settings.

This website uses cookies so that we can provide you with the best user experience possible. Cookie information is stored in your browser and performs functions such as recognising you when you return to our website and helping our team to understand which sections of the website you find most interesting and useful.

Strictly Necessary Cookie should be enabled at all times so that we can save your preferences for cookie settings.

If you disable this cookie, we will not be able to save your preferences. This means that every time you visit this website you will need to enable or disable cookies again.